There are people who come into our lives and open our hearts in ways we could never have imagined before meeting them. With Mars currently transiting my natal eighth house (sometimes called the house of death; though it’s more appropriate to call it the house of psychological transformation), the news of death came knocking on my door, not once, but twice in less than 24 hours. Two loves, two deaths. Both from my heart land of New Zealand.

Yesterday I received news that my former beau, John (my big love before I met Paul), had passed away from Parkinson’s Disease. The news wasn’t entirely unexpected, but to hear he had finally left this earthly realm, which we had shared together for a time, did indeed take my breath away. Rest In Peace, John, and thank you for the memories. (And for the stories I get to tell my daughters about my reckless youth!)

My father’s death in a car crash three years ago really heightened my perception of mortality, and I live my life knowing that at any time I, or those I love, could leave this earthly life. It really amplifies my desire to live a life of purpose and passion. Despite my belief in life after death, and that this life we live is but a mere dream, I still grieve deeply upon news of a passing. I had thought a lot of John recently, aware he was unwell and that his time would come soon. My immediate feeling upon hearing the news was “He’s at peace now.” I felt a sense of relief for him. What more could we wish for someone who has touched our heart deeply?

Today I shed tears in memory of my former lover, John McLean Thornburrow.

Our dear, dear friend Alice has passed away. In her 90s, I should never have expected she’d live forever, but if you knew Alice and her husband Murray you’d probably think they’d be around longer than you and I. They are both such an inspiration to me, and if I live to old age I can only pray that I share their zest for life.

They were keen gardeners and had a thriving garden. Alice knitted booties for premature babies in the hospital. (I secretly modelled some aspects of my character, Caroline Lafferty, in my novel Sisters of the Silver Moon, on Alice because I’ve been so inspired by her.) Her heart was big, kind and loving. Despite having lost a child, she never let it make her into a bitter person. Somehow the loss wove into the fabric of all the things that were amazing about her.

Just yesterday I was looking at a photo of Alice and Murray that I keep in my kitchen, smiling back at their beautiful smiles, and thinking “I must pop a card in the post”. I wanted to send her a copy of my novel to let her know she was immortalised in my character.

Alice and Murray had recently celebrated 72 years of marriage. They were genuinely in love with each other. And of all the couples I know, they are one of about four that I believe were true soul mates. They had such deep respect for each other, and this foundation allowed their marriage to grow and thrive. My grief and upset right now is founded on Murray’s loss of the woman who has been at his side for all of his adult life. How is it possible to move forward when you’ve had that taken away from you? I can’t bear the thought. The ache. The gut-wrenching loss. 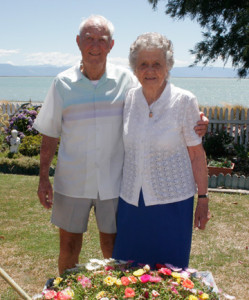 The price of loving someone so fully, so deeply, so open-heartedly is that the grief you feel at their passing is in direction proportion to the love. I pray that he feels her love around him every second of the day.

Indeed, there is a time to live, and a time to die. A time to grieve, and most definitely a time to cry.

Write That Eulogy is publishing in December 2022 a

Integral to our training is creating, narrating an

Minus six at 9am this morning. Brrrr! Have a be

A tad nippy at minus five when we arrived home fro

Beautiful outlook of snow on Cross Fell as viewed