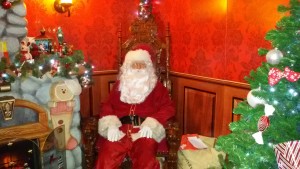 Every year for longer than I care to remember, I’ve spent the seven weeks before Christmas doing my version of the man with a long white beard and a red suit. My annual stint is almost over now. A lot of people have said to me ‘that must be a wonderful job’, and similar comments; and in the early days, before the novelty had worn off, I’d have happily done it year round – were it not for the wig and the beard. It’s claustrophobic (I’ve got an array of bad Santa puns), and itchy on the face and scalp. But as I walk out of that place for the final time this year (and, with any luck or positive thinking, the final time ever), a weight will lift from my shoulders. It’s an eight-hour day, five days a week; and, believe it or not, on a particularly busy day I can talk to 150 children. In my time as the old feller, I reckon I’ve seen nearly 40,000 children. To keep that up day after day takes a lot of stamina and a strong work ethic. I try to give a loving, warm and sometimes humorous experience to the people I see, although the time constraints don’t allow very much of that. I like to think I’ve got it off to a fine art, managing to do the best possible job under the circumstances.

As you can imagine, I see a cross section of parents, family members and children. I like most of the children I see, with some of the parents being absolutely delightful; and at the opposite end of the spectrum, there are a few who have no idea about how to be with and deal with children. I’d go as far as to suggest that perhaps they’d be better off putting their energies into something other than parenting.

There are several things that have really struck me over the years. One is the younger and younger ages at which children are given computers and the like. It’s been common this year for three-year-olds to be given iPads! And many children have two or three different games consoles. I have to bite my tongue, wanting to say (lecture) about the adverse effect of immersive screen time on young children. And then there’s the issue of the amount of money that’s being spent on these kids – often hundreds of pounds each. It doesn’t do them any good to have so much lavished on them; and perhaps the parents could redirect that money into a healthier lifestyle for themselves, or maybe pass some of it on to people who are struggling to make ends meet. It’s got to the stage now that some of the children obviously have so many ‘things’ at home that they’re incredibly blasé about these things they’re asking for, or have been told they’re going to receive. And whatever happened to sharing? It’s commonplace for each child to have their own Xbox, or whatever…so, maybe three in one family. Noticeably this year, there seems to have been less excitement and ‘magic’ amongst many of the children and parents. It’s almost as if they’re going through the motions – zombie-like. Now there’s a movie title – Santa versus Zombies! I remember when my and Veronika’s daughters were young, they’d be incredibly excited at the prospect of Christmas and all that went with it. The presents weren’t lavish, but they were much appreciated and cherished.

But the thing that still staggers me on a daily basis is how many parents don’t understand (and in some cases don’t care about) their child’s fears. Parent after parent will blithely come into the little room I’m in, and walk straight up to me with a frightened child/toddler/baby. I’ve become vigilant about this. About four years ago, I dropped my concentration for a second as a family came in. The mother ran over to me, and thrust the terrified 18-month-old in my face. The boy lashed out with his foot, and kicked me in the teeth. I was seething! Partly because of my physical pain, but even more because of her ignorance and the emotional pain she was inflicting on her child. It felt like about two minutes before I got myself together and could speak in a civil tone. In reality, it was probably 15-20 seconds – which is an eternity in those circumstances. The woman was oblivious, and the child was crying. If it had happened under any other circumstances I’d have spoken my mind – but it didn’t seem like the right time or place. These days, I keep my wits about me. I always look into the child’s eyes. You can tell straight away how relaxed/scared the child is, and I suggest (in a gentle manner) to any parent who is making a beeline for me with a frightened child to stay two or three yards away until the child gets used to me. You’d think that a parent would be aware if their child was frightened – by the stiffening of its body, but in many cases they either try to ignore me – or they keep edging surreptitiously closer to me. They seem to be obsessed with getting the child right up to me, and ideally on my knee. Well, Santa doesn’t take crap from anybody, and refuses to be complicit in child-cruelty. You’d be amazed by the confused looks I get from some parents when I explain that their child is terrified, and that just because I’m Santa and I (apparently) bring presents, doesn’t mean their youngster is going to be comfortable with a strange-looking old man in a red suit. Nearly always, even though they’re bemused, they eventually take what I’m saying on board; but occasionally I have to very firm. Attachment parenting this is not!

You may well wonder what I’m doing if I have so many reservations. I often wonder myself. Am I selling out? Maybe! But apart from the fact that it’s helped the family income over the years, I like to think that I’ve dropped the odd pearl here and there which may have resonated – both with the parents and the elves. The elves are usually young women in their late teens or early twenties. They probably think Santa is a bit odd giving them attachment-parenting tips. And, most importantly, I’ve given a lot of love and gentleness to many children.