Ah, the middle child. Often overlooked, unseen, tucked between siblings. Child-placement experts refer to the middle child as the invisible one. It’s easy to see why. The first child causes great excitement (or terror!) in the family. The second child (especially if it is the opposite sex) is usually given a thrilling welcome. Now, here’s where it gets interesting. If more than two children become part of a family, the placement often includes children of both sexes, and for many families this gives them a sense of ‘completeness’. But what of families that have four, five or more children? Sure, the eldest child gets top billing. The first child of either sex is considered special. Then, of course, there’s the baby of the family. Many parents are not conscious of the impact family placement has both on their child but also on how they parent. 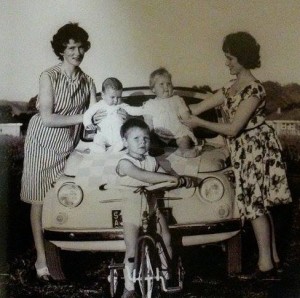 My mum (left) and auntie with my three older siblings. 1962. South Australia. Wolf (on the bike), Heidi (chubby blonde) and Horst (the baby).

Well, here’s my view: Yes, of course there is a lot of truth to the above. But there is so much more. As the fourth child of eight, I got to witness my mum raising two sets of children. There are twenty years between my eldest sibling and my youngest. That’s a massive span of time for a mother to grow, evolve and refine her parenting (especially if she chooses to do so consciously). Some of that witnessing was when I was in the pre-verbal stage and then, obviously, a fair bit was in various stages of development.

No matter where we were born into our family, as a child we want to be loved, we want to be seen, and we want to be our parents’ favourite. We want to be seen as special. That is the nature of being a child. You might think that the ideal would be being an only child, but knowing many people who were raised without siblings, I don’t believe this is the answer, either. We need to rub up against annoying brothers, spiteful sisters, show-off siblings, and retiring little brothers. We learn so much from a protective older sibling and a younger one who needs our support.

It is here, in the heart of the family home, that we learn about life. And about the barriers and boundaries of human relationships.

Yes, I get my nose out of joint that there are next-to-no photos of me in childhood. Wasn’t I important? I wonder, as I see yet another picture emerge of a sibling. There was, however, a lot of home film footage of me. Sadly, these got lost when my brother (who had them) moved house. I may have little memory of what I looked like, but my memories of childhood are rich and vivid.

I arrived into a family with two brothers and a sister waiting for me. My eldest brother, Wolf, adored me. He was nine years old when I was born, and just the other day he told me how exciting it was ~ and that it was a hot sunny day when I came home from the hospital. Bring back the sunshine!

There’s a five-year gap between my second-oldest brother, Horst, and I. There was plenty of time for me to get my fill of love, nurturing and experience with siblings before my younger sister, Ramona, came along just over five years later. And then there were three more brothers in quick succession. With their births, I witnessed a major shift in how my mother parented. It is the second-half of her parenting life which has impacted my parenting (and career) so profoundly.

Primarily, though, my placement in the family meant that I always had interactions with one sibling or another. This is how we learn. They are mirrors for us. It may not always be easy, and yes, we may feel invisible, jealous, and a whole lot more. We may witness siblings shining like stars at school or in extra-curricular activities, while we flail about, but you know, this is life. I have two siblings who were prefects at school. It’s a sure way to feel shit about your ability to shine, that’s for sure. But that was then, and this is now; and in fairness, I wagged (played truant) from school a LOT. I did not wear the ‘good girl’ shoes.

I left home at 16, and have spent most of my adult life living away from my birth country. When my dad was killed in a car accident almost three years ago, I gained incredible support from my siblings. It was an amazing week (despite the inevitable sadness and pain) because for the first time in our lives we were all in the same place at the same time. Priceless. What I have learnt since that time is how very much I love my siblings. Sure, if we spent any length of time together old childhood patterns would resurface. 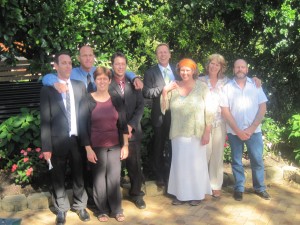 When my second-youngest brother, Rene, came to stay with us last year, it was truly the highlight of 2014 for me. I still see him as a chubby toddler running through the garden even though he’s grown into an incredibly handsome and charming man. 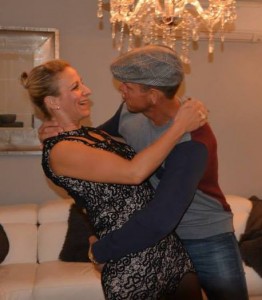 My brother, Rene, with the love of his life: Chantal.

I marvel at all my siblings, and where they are in life now, as parents, and the stories they’re living. I’m so proud of them and what they’ve created in their lives. I have no doubt they all have ‘issues’ about their place in the family. I reckon that’s probably inevitable. We’re all capable of being put out and can have selective memories. I do hope, though, that they can draw succour, as I have, from coming from a large family, and know that, no matter what, there was love.

At Carlisle Crematorium Chapel we said farewell to

At Carlisle Crematorium Chapel we offered the most

A bright burst of colour to greet us during the da