Don’t ask me why Saturday night is dessert night in our home, rather than say Wednesday or Monday…because I don’t know.

Last night we had one of my favourite desserts: pear and coconut crumble. It’s quick and easy to make, and tastes gorgeous!

I first wrote about this dessert in my novel, Bluey’s Café:

Home alone on Saturday night, instead of crawling into bed or watching late-night TV, Bluey headed to the kitchen. A small hessian sackful of ripe pears were begging for her to take notice of them. She peeled half a dozen, and sliced their tender juicy flesh in half, laying them in a pan with coconut oil and brown sugar. They began simmering. Their buttery and gritty flesh was perfect for a crumble. Coconut cream swirled around the pears, and a sprinkling of ground ginger dusted the top. 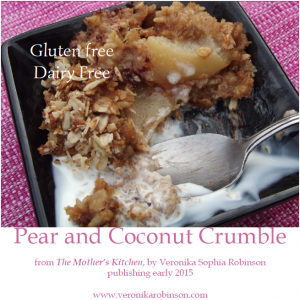 Preheat the oven to 180C. Peel the pears, cut in half and remove the stalks and seeds. Drizzle with lemon juice to stop browning.

Melt coconut oil (or margarine) in a pan, and add the pear halves. Add the sugar, and allow to caramelise.

After about fifteen minutes, add the coconut cream. Place the contents into a casserole dish. It will look like there’s too much liquid, but don’t worry, as it will be absorbed by the crumble.

Make the crumble. I prefer not to use flour in my crumble as I’m gluten free, but if you’d like it, use about 80g flour, and half the amount of oats. Rub the oil or margarine into the oats. Add the sugar and desiccated coconut. Add the pieces of chocolate and mix well. Place the mixture onto the top of the pears. Bake for 45 minutes.

A Beautiful Birth
Soup Season
Growing and Changing
Children and Writing
In My Kitchen: Aduki Bean and Quinoa Burgers
The Kitchen: heart of the home
0 replies

Another book for celebrants-in-training 2022. Thi

Updating our training book for the 2022 celebrants

Heart-led Celebrancy is about being a mindful gate

The most delicious meal EVER to celebrate Eliza's

A ceremony of a different sort for me today! It

Vegan for a month Reaching for the Depths
Scroll to top